Several years ago, I help create and co-host a podcast called The Thirsty Developer with my good friend and fellow Microsoft Evangelist, Dave Bost. Creating, producing and editing the show was one of the most enjoyable experiences I have had around work. I hesitate to call it work, because we did it mainly after hours and had so much fun doing it. 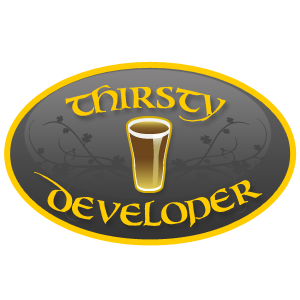 I left the show when I changed roles at Microsoft and a couple of other folks had co-hosting duties after me: Clark Sell and Adam Hoffman. Of course you never really “leave” something that you helped create, you only stop doing it as often.

As some of you may know, Dave passed away a couple of years ago. I don’t speak much of it on social media, but I miss him terribly even to this day. I worked with Dave’s wife to transfer the domain name over to me. In doing so we had some issues with the content. The site was “off the net” for a few months.

I did manage to find a copy of the site that dated back to when I was still running things. I have the RSS feed for the majority of the show notes (I think I have ~90 of the 104 total episodes). However, I only have 69 of the audio files.

I am hoping that I can find more of the audio files and locate the rest of the show notes as well. If anyone stumbles across any of the old shows, please let me know.

I hope that keeping the old episodes out there will allow the many great guests developers and other friends of the show a chance to go back and listen to their favorite episodes.