For week 1 of my Book-a-week resolution I read Free: The Future of a Radical Price by Chris Anderson. Below is a review of that book. 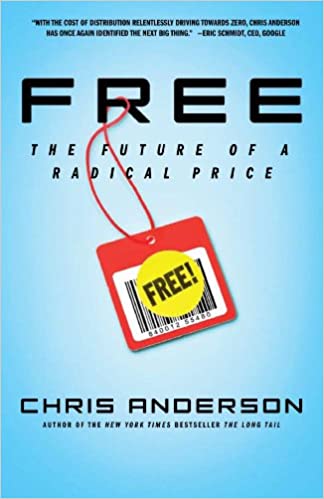 If you have not read Chris Anderson’s The Long Tail I would read that book instead of Free. If you have read The Long Tail, then Free is a decent investment of your time. While Free is not technically a sequel or a continuation of The Long Tail, it is a deeper dive into how shift from physical media (such as CDs, DVDs, etc.) to digital media and distribution is effecting our economy and society.

What I liked about the book

Before I started reading the book and even into the first 20 pages or so I was a little concerned that Free was going to be focused on the mantra of “give everything away” or “figure out the business model later”. What I quickly found was that Chris Anderson’s study of the “radical price” was clearly about using Free as part of an overall strategy of having a solid business plan. He actually starts with some historical (going back more than 100 years) examples of how people have used Free in order to gain traction in a market or used it to sell complimentary goods. He ends the book with many ideas and examples for using Free.

One of the other things that I really enjoyed was the sidebars that Chris Anderson presents on real world examples of companies that use Free as part of their business strategy. They sidebars, despite being generally a page or less in length, are rich in analysis and often have an interesting graph to illustrate the example. The Long Tail and the sidebars both made great use of the graphics to add richness to the text.

I alluded to the how much I liked the real world examples and graphics in the sidebars in the last section. I found that the main text of the book lacked some of the hard data that I am used to in Chris Anderson’s writing style. In Free he provides lots of examples to support his ideas, but they often seem anecdotal examples. Contrast this with the rich data-backed examples that he presented in The Long Tail. I think this is more of a criticism of the research and writing style of the book, rather than me thinking that the ideas he presents are flawed. I think the ideas that Chris presents are sound and everyone running a business should consider the ideas presented if for no other reason than your competitors might be considering Free at this moment.

An example of Free

This blog is a good example of Free (Chris Anderson identities it as such in the book). I post my thoughts here to share them with the world and in hopes to raise my reputation as a Software Architect. I take it a step further a put a Creative Commons License on the work, so that other can take it and do interesting things with it and owe me nothing other than an attribution.