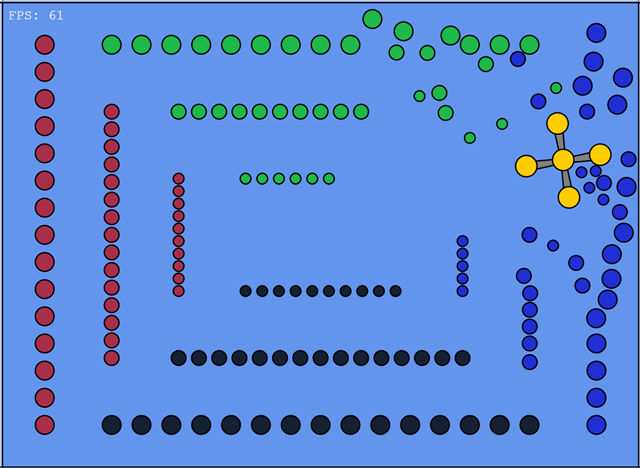 I gave an overview of Silverlight to the Fox Valley .NET User Group last night in Appleton, WI, I had a lot of fun and they are a really good group of folks up there. One of the best changes that I have made to my Silverlight overview since I first gave it out in Madison, WI at the Madison .NET Users Group in June is that I have started to work in Silverlight applications that have been created by people outside of Microsoft. In June Silverlight was new enough that most of the samples were from Microsoft or companies that worked specifically to create samples for MIX.

One of the coolest samples out there now is the Farseer Physics Engine for Silverlight 1.1. The Farseer engine was originally built for the XNA platform in order to create 2D games for the XBOX 360 platform. Briefly put, physics are very important to game play. How objects move and interact with each other pretty much is 50% of the game play, the story and some of the other effects (like Audio) are the rest of the game. If you are interested in checking out the engine itself, the project is on codeplex.

I was ending my presentation by showing 3 or 4 real world samples of Silverlight. When I pulled up the Silverlight version of Farseer, someone in the back of the room raise their hand and pointed to the person next to them and said “He wrote Farseer”, sure enough Jeff Weber was in the room (note: Jeff is the genius behind the engine, Bill Reiss of Blue Rose Games did the Silverlight work). I always say that every time that you present on a subject to a room full of people there is at least 1 person in the room who knows more about it than you, but this one takes the cake! I was so freaked out by the coincidence, that I did not get a chance to tell Jeff how cool his engine was.