I have to roll my eyes every time someone says “Rich Internet Application” and someone else corrects them with “Rich Interactive Application”. It is the kind of debate that gives us acronyms that are not actually acronyms any more. It seems that I am not the only one that thinks arguing about the definition is silly. The Nectarine Blog out of Australia has started a comic strip called “Barley out of Beta” that is also poking fun of the debate: 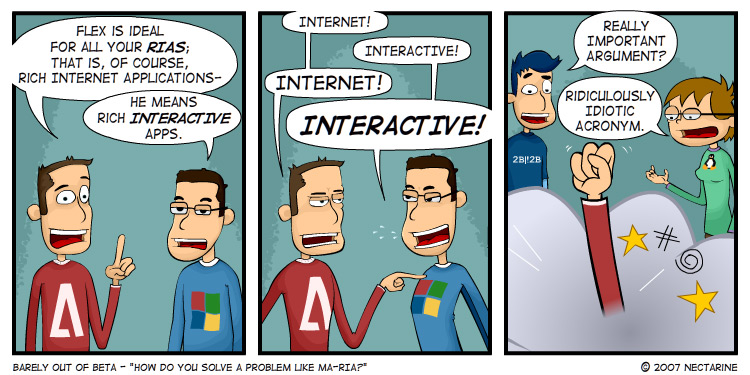 The Microsoft guy pictured there is Scott Barnes, a Microsoft Developer Evangelist from Australia (who was an Adobe developer before coming to the dark side). Once the comic settles the dispute over the meaning of RIA (they have published the second strip already), I bet it will still continue. There are lots of other topics to poke fun of in the RIA and Adobe vs Microsoft space.

Note: The comic was re-posted here with kind permission, please click on the picture to see the original blog post.