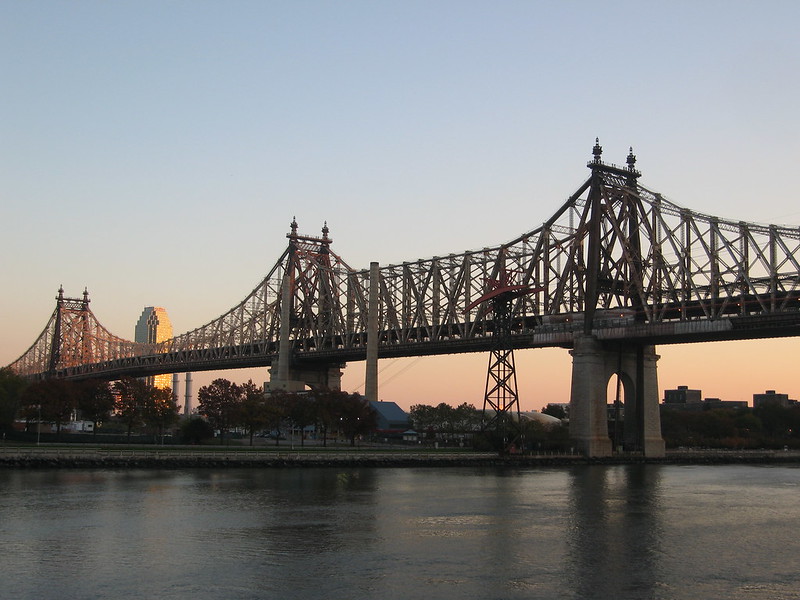 The last time I was in New York City I got a fascinating history lesson about the Queensboro Bridge from the cab driver that took me from midtown to LaGuardia Airport. He started off the lesson with a tongue in cheek statement:

It only took them 6 years to build that bridge 100 years ago, but they have spent the last 30 years just painting it.

I am fascinated by stories of complex construction like bridges, stadiums and unique skyscrapers and buildings. So I really loved the cab driver telling me about the bridge and while he did, I got a lesson in the cost of construction vs. maintenance.

The history of the bridge starts long before the construction actually started. Attempts to build a bridge that connects midtown Manhattan to Queens actually started prior to the Civil War. The location of the bridge was ideal to span the East River, because of Roosevelt Island being located in the middle of the waterway.

After many years of private efforts failing the newly formed Department of Bridges of New York City started construction in 1903, after replacing the architect on the project. The construction was plagued with delays, including the collapse of part of the bridge due to a wind storm and a labor unrest that nearly lead to the dynamiting of part of the bridge by upset laborers. The bridge was finally completed in 1909 at the total cost of roughly 18 million dollars and the death of 50 workers during construction.

The bridge and its associated rail and tramway systems underwent a number of changes during its history as the street car system was decommissioned and the rail systems were updated to accommodate the growing city.

In 1979 a project was commissioned to perform rehabilitation of the Queensboro Bridge. 30 years, six project phases and an estimated $300 million dollars later they are still working on the bridge. The six different projects did more than just paint the bridge (but a lot of effort was expended on painting the bridge), but all of the changes did not change the fundamental structure of the bridge.

I do not mean to belittle the teams working on the rehabilitation of the Queensboro Bridge. I am actually quite impressed at amount of work that they are able to do while keeping the bridge open for business; it is easier to build a bridge than maintain it, because there was no traffic using it when it is being built. I liked the contrasting story of the bridge’s construction and maintenance because it shows something that we deal with every day in the world of software development: It can be more expensive to maintain a code base than it was to develop it.

If you work in software, you know what I am talking about. There are lots of different estimates on the cost of software maintenance, but pretty much everyone agrees that the majority of IT budgets are spent just maintaining the systems that they currently have in house and that for every dollar you spend building or buying software you will certainly spend at least another dollar maintaining it (and I have heard that estimates for maintenance can go to 3 times the initial investment).

To put the Queensboro Bridge in perspective, I used the US Inflation Calculator and figured that the original cost of $18,000,000 in 1909 is about $269,454,545 in 1994 dollars (the midpoint of the 30 years of rehabilitation). Making it a bit of bargain when compared to some software projects.

Notes: The inflation calculator does not go back to 1909, so I used 1913. There are some fascinating photos of the history of the bridge on gallery of http://queensborobridge.org/, brought to you by the Greater Astoria Historical Society and the Roosevelt Island Historical Society.