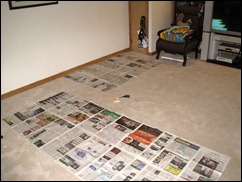 Jodie and I went furniture shopping this weekend. Our basement furniture is really starting to show its age (10 years) and it is time for a replacement set. We found a really nice oversized couch and chair + 1/2 set at a local furniture store (BTW – I did not know that there was such a thing as a chair + 1/2). The furniture seemed very well made, the style was nice and it was available at a very reasonable price. We were concerned about the size of the pieces in the set; we have a nice finished area in our basement, but way the floor plan is laid out limits the area in front of the television where you would put a couch and a chair.

We could have bought the furniture and had it delivered and then started trying to figure out where to place the pieces, but I thought I would do some paper prototyping instead. Using the measurements of the pieces that I got at the furniture store I used newspaper and tape to lay out the dimensions of the furniture. It was then very quick and easy to figure out that the space was too small for the oversized furniture. About $2.00 worth of supplies and 30 minutes of time avoided a potential fiasco with figuring out that we had bought the wrong furniture.

In software development we get really hung up on prototyping. How many times have you been in a conversation about how all the work done up to this point was a “prototype” and should be considered “throw away” code? I personally have seen prototypes carry on for months, which is not a good use of time or effort.

I blame a lot of the problems we have with prototyping on the tools that we chose to prototype with. Quite often we use a high fidelity tool like Photoshop, Visio or PowerPoint (and I am sure you can add to the list). The rest of the time we use the actual development tools that we would use to build the finished solution like Visual Studio, Flex Builder, Expression Blend, etc. It is no wonder that our non-technical partners are confused at why this is a prototype when it looks like a real application.

There are technology solutions that allow you to have electronic low fidelity prototypes; Expression Blend’s sketchflow and balsamiq are two that come to mind. Those tools are fantastic, but you should try just using simple paper prototypes as well. There is no more rapid prototyping than laying out screens and workflows using a few sheets of paper and a sharpie.

Note: My story about the furniture would not be complete unless I told you that Jodie and I disagreed on our concern about the size of the furniture. We were both concerned that it was too big, but I was concerned about how it would fit in the room, Jodie was concerned that the couch would not be able to even get down the stairs. It turns out that we were both right, but I got a blog post out of my paper prototyping.