I attended the third meeting of the Chicago Architects Group (event web site – the official web site is coming soon) in downtown Chicago on Thursday the 21st. The CAG is a community based group that is focused on the discipline of software architecture (all facets of it: solutions architecture, enterprise architecture and infrastructure architecture). Even though the group is in its infancy, I think the organizers are on to something very cool by creating a community for architects to share knowledge and war stories.

Tonight’s discussion was kicked off with a presentation by Carl Franklin, who is one of the CAG co-founders and a solutions architect with a local Chicago firm, Triton-Tek. The CAG meetings are supposed to be group discussions that are catalyzed by a short presentation. Carl’s topic was “What is an architect?” that was all about the role of the architect and how the role has evolved over the last 15 (or so) years as the industry has come to recognize the importance of software architecture and the unique role of the software architect. His presentation did lead to some very interesting discussions. We talked a lot about certifications during the discussion. 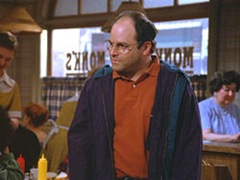 It is only natural to talk about certification for software architects, because the traditional architects (the kind that build buildings and bridges) go through a rigid education and certification process before they can carry and use the title of architect. In software architecture, the most common certification is achieved through the “Costanza” process. The lovable character from Seinfeld who always wanted to be an architect, so he just announced himself as an architect. Some of the discussion at the event echoed this with one of the common patterns that people see is senior developers who carry the title of architect because their company thinks that is the next logical step for a senior developer.

There are some real key differences in how software architect are certified and how traditional architects are. In the United States, traditional architect are certified by state and generally there is a board that is appointed by the state to perform the certification or at least to have oversight in the certification process. So it is a group of practicing architect that make the decisions, not just a government employee. In addition there is a national board that provides some oversight and provides consistency from state to state (very useful as people move from project to project).

Regardless of how you come down on the certification discussion, I think that we would all agree that the education and experience is much more important than the actual process of certification and the nice certificate that you get to hang on the wall when you are finished.

Recently I had a short conversation with my wife and a few of her friends. They were talking about getting their certifications in their respective fields (My wife is studying for her certification as an Optician). I was fascinated by the number of hours of training, apprenticeship and continuing education that someone has to take to become certified in a field such as cosmetology. Even though there are certifications for software architecture, none of them are required in order to be a practicing software architect. I think it is a real contradiction because a bad haircut grows out in a month or two, you can live with a bad architecture for years. 🙂