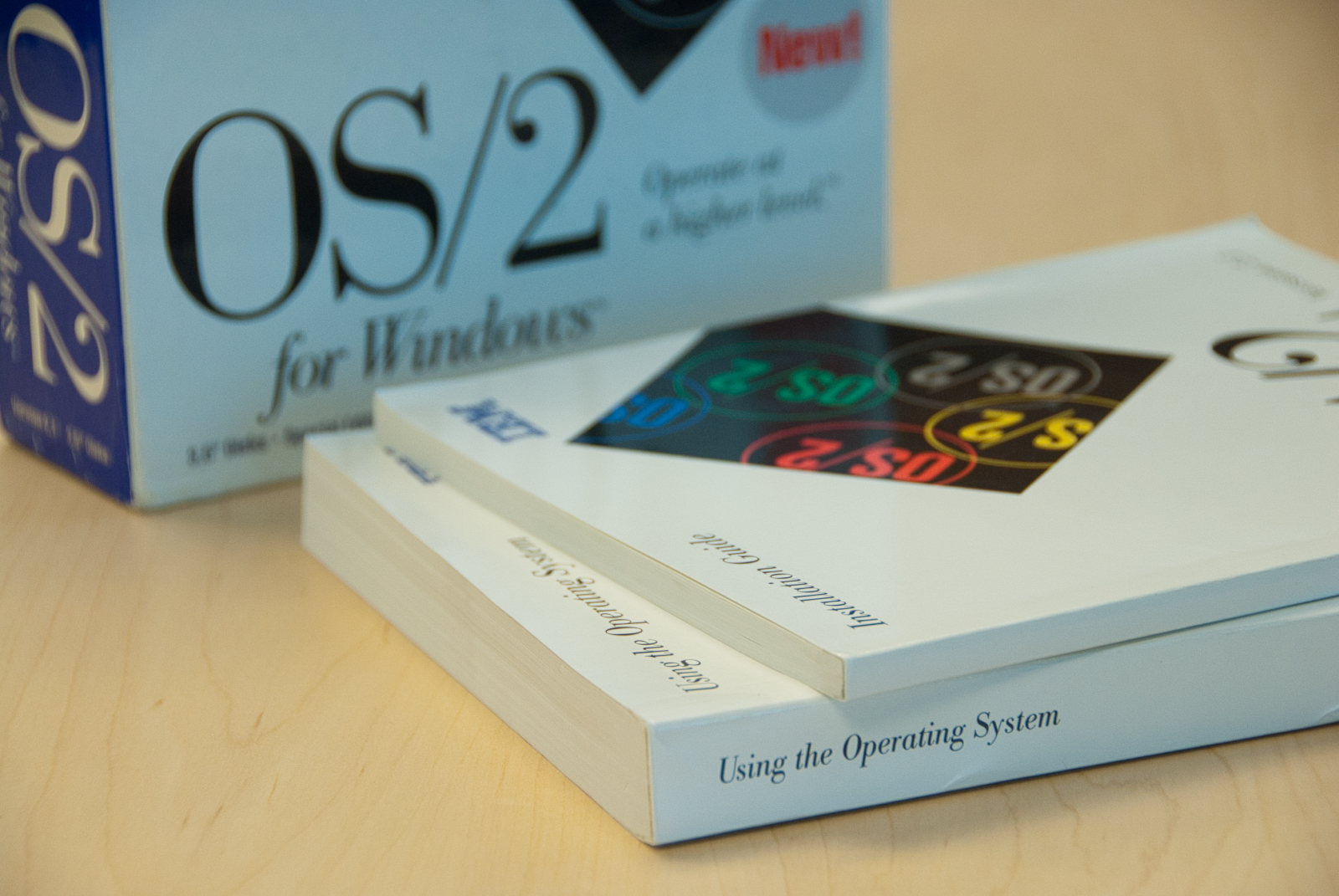 I recently ordered a copy of OS/2 2.1 for Windows on the Internet swap meet know as eBay. I have been playing around with virtual machines quite a bit, since I did the Thirsty Developer Podcast interview on Hyper-V with my pal Beth Humphreys (AKA Server Girl). When I saw this particular version of OS/2 I could not pass up the chance to get it.

When the box came in the mail it was quite heavy, I figured I got my money’s worth on the $10 shipping and handling charge, because most of it actually went to the cost of shipping. When I opened the box I quickly figured out why it was so heavy. The seller had included everything that came with the original box including the card for the complimentary issue of Inside OS/2 journal by The Cobb Group (which I doubt I will get if I send in the card). Of course this also included the 2 hefty sized manuals: Installation Guide and Using the Operating System as well as a bunch of smaller supplementary manuals for things like the printer drivers, video drivers and event one dedicated to understanding the special edition (the for Windows part of the title).

Flipping through the manuals got me thinking about how manuals have changed over the years. The most obvious change is that many software applications don’t ship with manuals any more. Even the software applications that do ship with manuals have dramatically slimmed down the size of the manuals. Even if you get a manual with your software, it will probably not spend the 183 pages that the OS/2 manual does on just installing the software (including 36 pages dedicated to the installation of the software on dual boot systems).

There are several things that have caused the dramatic reduction in software manuals:

Web Pages – The Internet was around when that version of OS/2 shipped, but it was mainly an academic network that connected colleges and universities and some technology oriented companies. Shortly after that operating system shipped we saw an explosion of what most people consider the Internet – web pages. Software companies eventually started using it to store and deliver their documentation. Lots of motivation for this, but cost was a primary driver.

Books replaced manuals – O’Rielly publishes a very popular series of books called The Missing Manual that they call “the book that should have been in the box”. Many times a book can be much more valuable than a software manual for learning a new product. Looking for a manual? Maybe you should try a book instead.

Documentation became integrated with the application – Dedicated electronic help files and readme.txt files were the start of this. The original readme.txt file was a necessity of how software was developed and shipped. You could literally update that file minutes before the disk was created, as opposed to software manuals that had lead time to print and ship to have them ready for packaging. So that file contained the latest and greatest information, which included information about errors in the manuals. Modern applications provide context sensitive help and “show me” type functionality that absolutely blows away the printed word.

People became used to software – Early software manuals spent a lot of time explaining complex concepts to end users like “how to use a mouse” and “what is a window”. I am not poking fun at this, it was very necessary at the time because people where making a leap from a character based system to a graphical system or (maybe even more common) from no computer to a computer. But you can assume that if you use a common metaphor, then most of your users will quickly figure out how to use your interface.

How many manuals do you have?

If you are like me, you have a drawer in your house that is dedicated to manuals that ship with the various products that you buy (I am talking about all manuals, not just computer manuals). My drawer is so full of manuals that I am about to spill into a second drawer. Showing my OCD streak, I will never throw away a manual for something I still own. I have not referred to the manual for the Pioneer SX2300 receiver that I bought in 1988 in 20 years, but you never know when it will come in handy (even though I only turn it on a couple of times a year). Even though I have more than 100 manuals, I can’t seem to find any software manuals other than the ones that I got with my circa 1992 Operating System.