I got a new laptop right before the holidays (as a total aside it is a Dell M1330 and is a wonderful machine with only a few shortcomings). I follow a standard practice of never using the image that the hardware manufacturers put on their laptops. There are a number of reasons I do this:

When I setup the Dell M1330, I followed a list of software that I install on my machines (Windows, Office, Visual Studio and on down the line). I forgot to put Adobe’s Flash on the list of stuff to install (I did have Adobe PDF Reader on the list). So the first time I went to a web site that used flash, I got the pop-up notification in Internet Explorer to install the Flash ActiveX control. I almost right clicked and hit “install””, but I decided instead to see if I could go a full week without installing Flash as an experiment.

I am not a Flash Hater

First and foremost I did not do this because Flash is an Adobe product and now Microsoft has a product in that space, Microsoft Silverlight. I had an intellectual curiosity about how the web experience would be without Flash. Since I ended my 7 day experience I have installed Flash in Internet Explorer, although I also have Firefox installed and I do not have Flash on that browser (more on that later in this article). I even embedded SlideShare into yesterday’s post on Programming in the Cloud and it is a Flash Application.

How did I ever survive?

I am hear to tell you that you can survive (and even thrive) on the web without Flash, but you might not want to. Almost every page that I visited fell into one of the following buckets:

I did not find a single page where I thought “I absolutely have to see that”. In many cases I just went to another web site to find the information. It made it surfing a little tougher and a less pleasant experience, but again I was able to survive.

One of the reasons that I wanted to see if I could survive a week without Flash is because of an article from last summer by Bob Cringely entitled An AIR of Invisibility: Adobe has Microsoft in its sights. In the article he points:

…once a technology had reached the point where everyone had it, then people simply forgot about it and from then on assumed it would be there. Invisibility is a good thing because it means there will always be a market for your product.

Bob points out that many computer technologies have become invisible (HTML and Ethernet as examples), but seldom does a computer software application. I think that in the case of Flash web developers assume that it is going to be there. Why wouldn’t you assume it is there, after all Flash 8 (or higher) enjoys a 95% penetration.

The downside of assuming any plug-in is there

It is easiest just to show you: 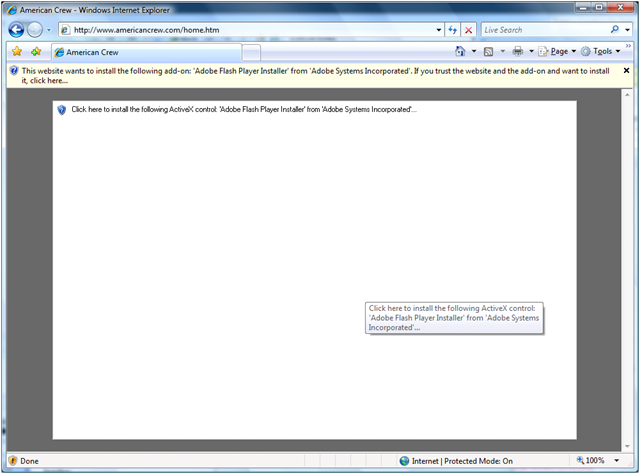 This is the experience that I received on the sites for a lot of product companies (consumer products, restaurants and even an automobile company). Almost all of these sites did not give me an alternative to the Flash based experience, nor did they degrade the experience nicely. Many of the sites did not even try to tell me the issue that I was encountering, nor did they take advantage of the ability to brand the install experience. Here is an example of a company that did take advantage of the branded install experience: 🙂 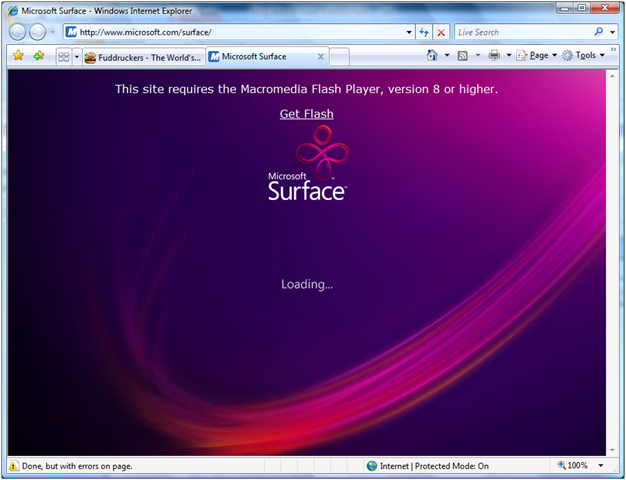 As Rich Internet Applications (RIAs) built with Flash and Microsoft Silverlight become more and more common we need to really think about the experience that people who do not have the plugin will have. RIAs should make the experience more pleasant, not less.