The first ever MOSSCamp was held this past Friday (November 9th, 2007) in Chicago, IL. This was a devcamp style event that was focused around Windows SharePoint Services and SharePoint 2007. 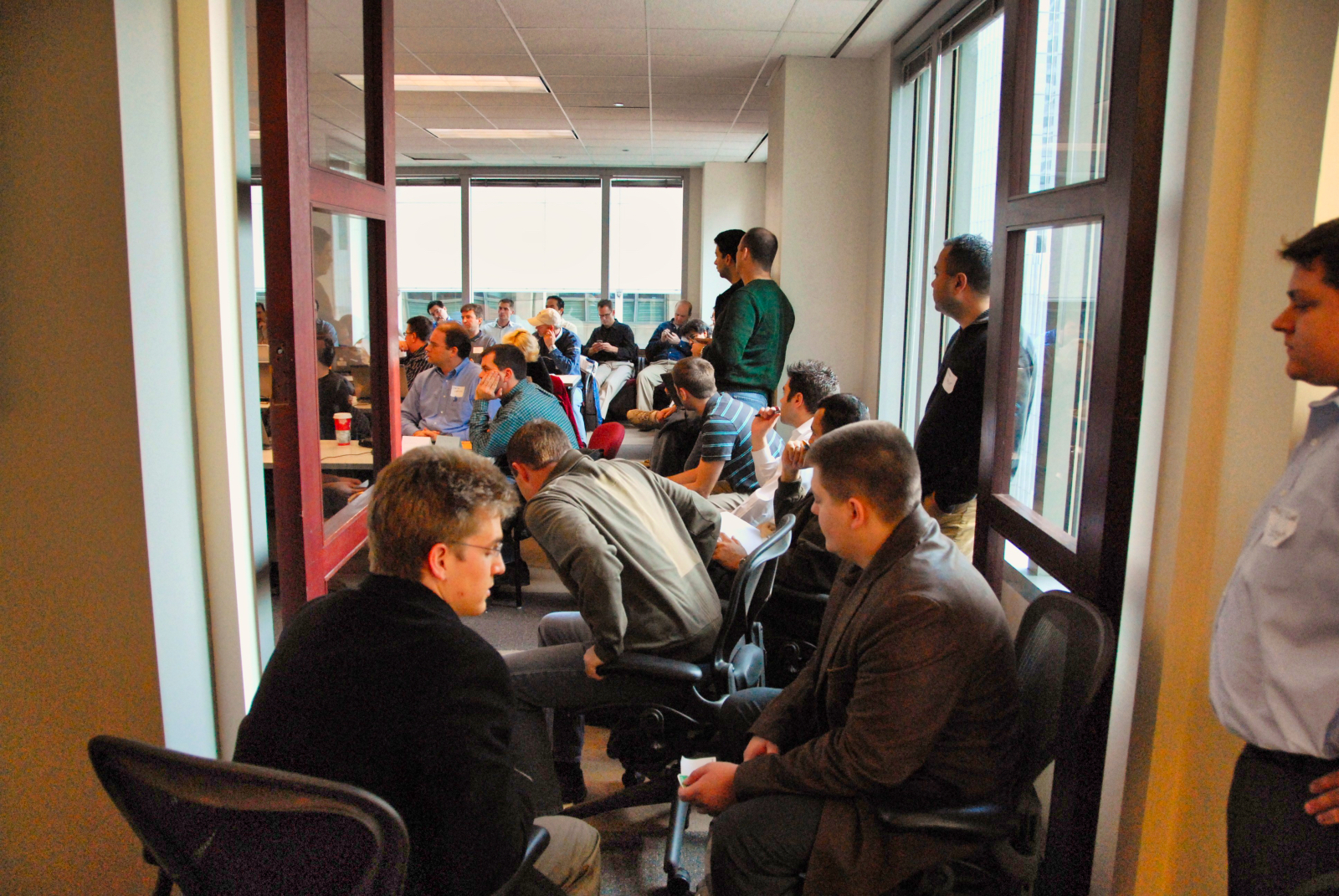 One of the highlights of MOSSCamp was the number of people that showed up to the event, as near as we can figure we had about 110 people at one point or another during the day. Closely related to this highlight (actually directly proportional to it) was the lowlight that we pushed the facilities to the edge. It was standing room only for the first couple hours of the event (as you can see by the photo, campers were literally spilling out into the halls). I appreciated the patience that everyone showed with tight quarters. We capped the registration at 130 campers and wait listed 10 more folks (many more people wanted to come to the camp, but we had to turn them away). To answer a question that many people might be asking, we did not plan for 110 people. We actually thought we would get between 80-90 (we based the estimate on historical drop off figures from past events, which are typically 25-40%). Clearly we underestimated the interest that people had in MOSSCamp and when we have a MOSSCamp 2008 (and there is a good chance that we will), we will adjust the registration numbers and / or get a bigger room.

The camp organizers did all that we could to ease the congestion. I for one gave up my seat at the event, and even exited the main room (I hung out in the kitchen area and talked with campers). Many of the camp organizers also skipped lunch so that we could make sure everyone got a shot at the pizza (thankfully everyone did get at least one plate of pizza). The office manager at Clarity ordered up dozens of cookies for an afternoon snack (the pizza went so fast that nobody was able to get seconds). The guys at K2 stepped up big for us by having an unplanned breakout session during lunch so that we could relieve some of the congestion in the main room and even ran that session twice (thanks guys).

My Favorite Parts of the Camp 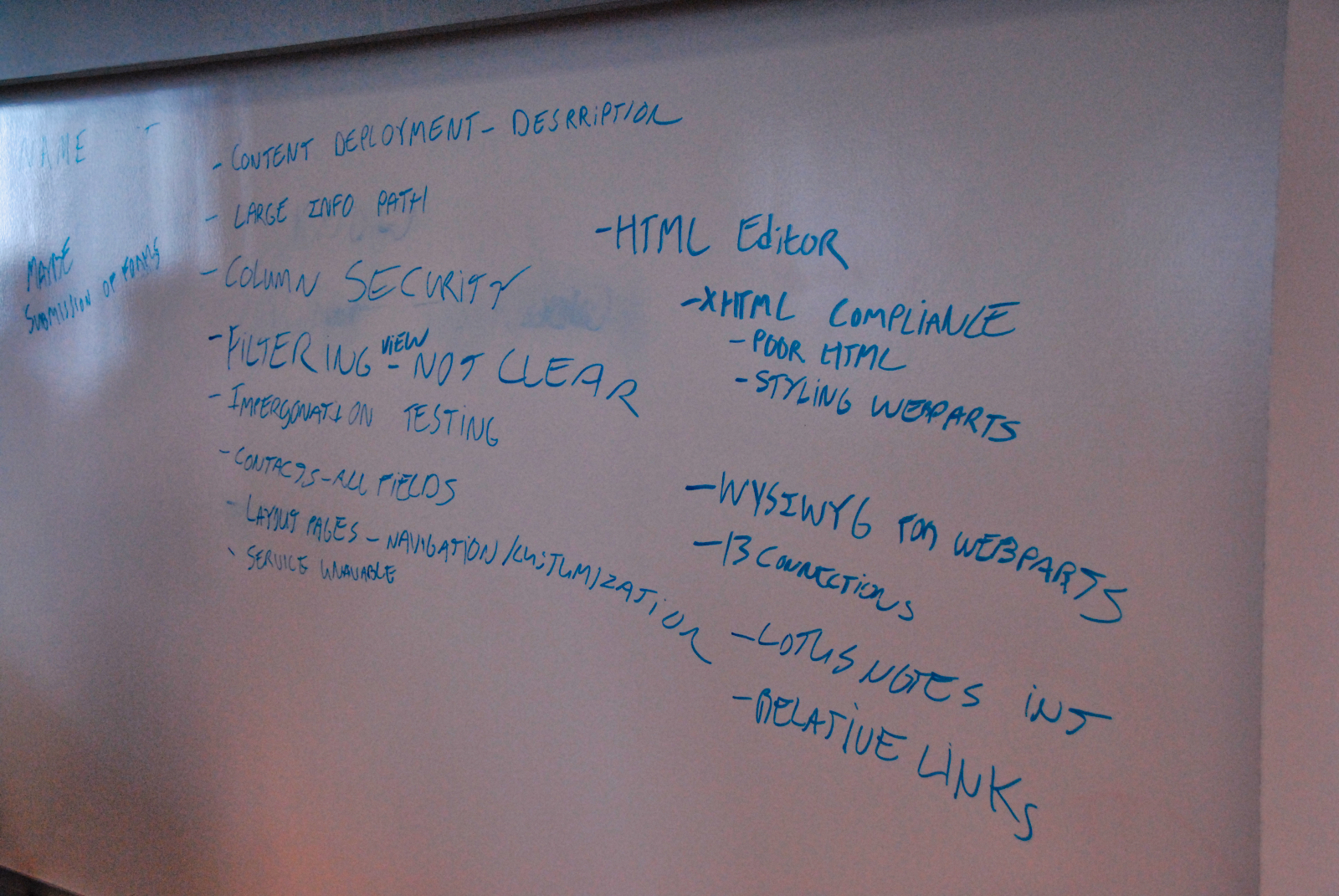 I have to say that the SharePoint airing of grievances was one of the best parts of the camp. We gave the campers about 15 minutes to stand up and say things they don’t like about SharePoint or to raise issues that they have had when using the platform. It was meant to be a fun activity, but was also an opportunity for people to connect. We had several people bring up issues that other people in the camp had either solved or had some expertise around the problem so that they were able to help each other. Here was the grievances that were aired during the session:

The other thing that I enjoyed was talking to the campers on how they were using SharePoint. I met a gentleman from a large company that was telling me about their SharePoint implementation and he mentioned that they had “200,000 users on their implementation”. I said “Oh, you have an Internet facing implementation”. He said “No, we have that many employees and they are all on SharePoint”, he then showed me some very impressive architectural diagrams on the implementation (jaw dropping). I also met a guy who told me that he is “an open source guy”, but SharePoint is compelling enough that his consulting company is starting to focus on it.

Don’t call it a barcamp

MOSSCamp was structured as an unconference, but the organizers made it clear that that we should not draw any parallels to barcamp. Barcamps are user generated conferences that cover a broad variety of topics (I was in a gene splicing conversation at a barcamp), but in general the barcamps are focused on Open Source technologies. Because SharePoint is a commercial product we wanted to make sure that we did not say “it is like a barcamp”. We also made sure that the camp Wiki was not hosted on barcamp.org. This was also a good chance to show how you can host a wiki on WSS.

There was some trepidation at first with the unconference style of the event. It took a few minutes for the campers to get into the groove of participating in the event. By the end of the day, people were just hanging out in various parts of the Clarity office learning and sharing with each other.