On Thursday, October 25, 2007 the 2nd Annual Chicagoland Innovation Summit was held in Chicago, IL. The event was presented by Innovate Now. Microsoft was a sponsor and we had a large presence at the event, but Microsoft was not the only company at the event. the booth next to ours was manned by Wolfram Research, the creators of the Mathematica software. Mathematica is very cool in and of itself, but I was most intrigued by the computing device they had on their display table. This is the fourth article about some of the innovations that were showcased, the first article was on Photosynth and is located here, the second article was on Seadragon and is located here, and the third article was on Surface and is located here.

What is the 100 Dollar Laptop?

“The 100 Dollar Laptop” is a nickname that seems to be sticking to an initiative that is being spear headed by a not for profit organization called One laptop per child. The goal of the organization is: “To provide children around the world with new opportunities to explore, experiment and express themselves.” There are lots of components to this goal, but one of the central components is to put into the hands of every child a computing device that they can use to foster education. By every child they mean literally every child in every country on the face of the earth (clearly they are going to focus on developing countries). In order to be successful, they figured that they would need to find a way to get the price of the device to around $100 USD and that is where the nickname comes from.

What challenges do they need to overcome?

There are several challenges to overcome with producing a laptop for $100 that can be used by every child. It would be challenging enough to produce a $100 laptop for use in the United States, but imagine the challenges brought forth by delivering it in the 3rd world. In the United States we take our power systems for granted, they are pretty much there 100% of the time (the occasional weather related outages aside). In most 3rd world counties you do not get consistent power outside of the major cities and in the smallest villages there is no power at all. They are designing this laptop so that it can be used without power (using a hand crank or foot pedal - the design is still not complete).

Another Challenge is the network connectivity. They are envisioning a time when in each school there will be a network connection, but probably only one. The laptops are being designed with a Mesh Network that will allow the individual laptops to connect with each other using their onboard antennas and if one laptop is connected to the Internet, all of the computers will be to share that connection (remember that the next time you complain about the slow network access at a hotel or coffee shop). If there is no network connection, the computers in the mesh network will be able to share between each other. 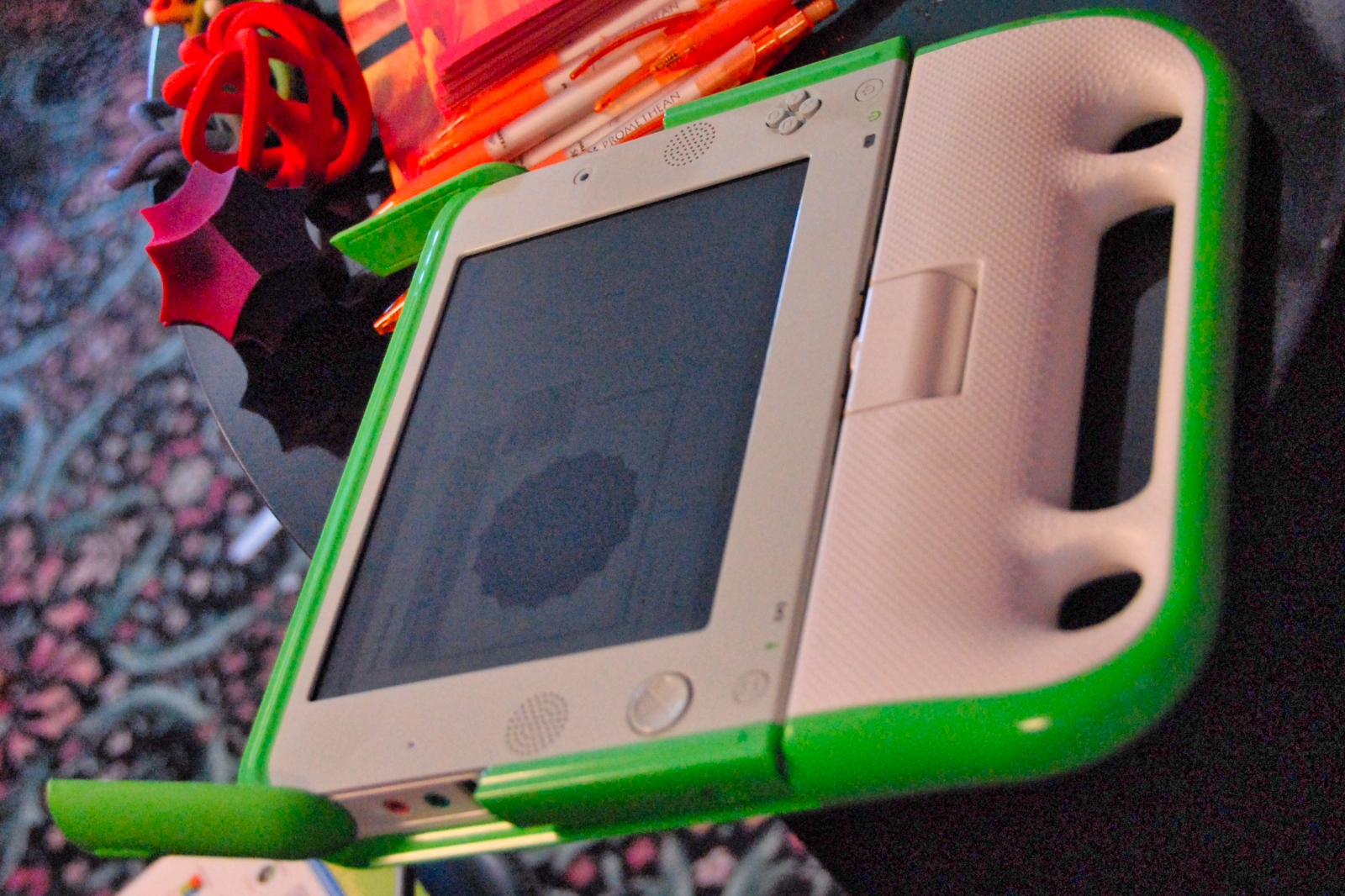 This is not a “toy” computer

At first glance this looks like a toy that your would find at the toy store at your local mall. It has a plastic shell and the keyboard and other items are accented with a bright green color that looks very playful. Each of the choices that they have made in the device are a function of the design goals. The device has to be rugged, lightweight and cheap to produce, so a molded plastic is probably the best choice given those constraints. The device is also designed with a hinge that allows it to be folded for carrying and also allows it to work in a tablet style mode.

Will they make their goal?

The project is currently quite a ways off from reaching their goal of $100 per unit. The current model (which actually goes on sale on November 12th, 2007) will cost about $200 to produce. They are placing it for sale in the United States (and elsewhere), but they are asking people to buy 2 units for $399. One of those units will be delivered to you and the other will be sent to a child in a third world country (and you get a $200 tax deduction). I have no doubt that they will eventually be able to produce the unit for $100, it is simply a function of the price of the components continuing to drop and the fact that they will have economies of scale because they are going to produce millions of these devices.