Second Life has come up a lot over the last few weeks and I must admit that I still do not “get” what it is all about. I have never been in world (honest), but it seems like the virtual world is starting to spill into the real world. I cite some recent examples…

I watch all 3 of the CSI shows (And I am convinced that they would have more than 3 if they could figure out what WHO song would work for the show openings, “My Generation” and “Happy Jack” just won’t cut it). Probably my favorite one is CSI: New York, because Gary Sinise is one of my favorite actors. The episode from a couple of weeks ago had a tie in with second life. There was a murder committed in real life and the CSI team had to enter second life to solve the crime. The shows creators have taken it a step further and have created a second life version of the show where you can solve crimes.

Note: I did not actually get to see this episode, my DVR freaked out and did not record it, but I will catch the repeat when it is on.

Is it virtual Cheating?

My wife Jodie asked me the other day if I had heard about the guy that is married in real life and has a virtual wife in second life. I have not heard of it, even though it is a rather big new story, the Wall Street Journal covered it. Short story is that the guy is married and lives in Phoenix, AZ and he got married to a woman in Second Life last May, but he has never met that woman. Should his real world wife be worried? Funny twist to the story is that they met online as well (but the old fashioned way - in a chat room).

Jodie asked me if I thought that this was cheating. I answered honestly, yes, I did think that this was cheating. The way that she asked the question I could tell that that was the answer that she wanted to hear and I am not sure what I would have done if I disagreed with the notion that he is cheating. I do think that if you go through the ceremony, even if it is in a virtual world, that you are breaking the marriage vow.

Just a note to Ric Hoogestraat (the first life) or Dutch Hoorenbeek (the second life): if you are going to go off an get hitched, don’t post wedding photos where your wife can see them! 🙂

The Office gets into the “game” as well

I signed up for Second Life about a year ago. Back then, my life was so great that I literally wanted a second one. Absolutely everything was the same…except I could fly. - Dwight Schrute 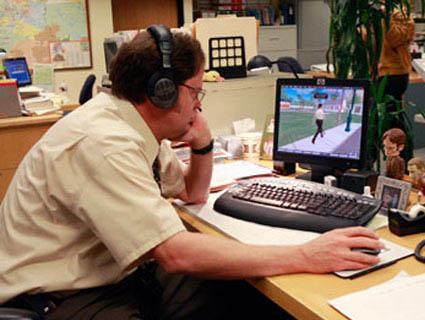 Probably my favorite TV Show is the American version of “The Office”. While CSI: New York embraced the virtual world, the office did what it did with everything else, it looked at it from a more light hearted approach. You got to see the Avatars for Dwight and Jim and while Jim was originally making fun of second life, you get the impression that he gets “hooked” into it.

Dwight Schrute: Second Life is not a game. It is a multi-user, virtual environment. It doesn’t have points, or scores, it doesn’t have winners or losers.
Jim Halpert: Oh it has losers.

My pal and teammate, Zain Naboulsi, has been talking my ear off about second life since pretty much the moment I met him. Zain has been working on putting together a .NET development community in second life. He and some other people have quietly put together the Second Life .Net Developers User Group and have had a couple of smaller meetings (picture on the right is Horatio Decosta presenting at a meeting). The first big event for the group will be taking place in early December the C# Day is an all day event targeted at people (avatars?) that are new to the C# Language.

The most interesting reference to second life was one that I heard recently on an NPR Podcast called “Virtual Recruiting for Real-World Jobs”. It talked about companies that were using virtual job fares and virtual world interviews to hire candidates. I was shocked to learn that Microsoft had actually actually done recruiting in the virtual world (maybe that is how they found Zain?). 🙂 The podcast talked about the advantages to virtual recruiting and the pitfalls as well.

You know that this is being taken seriously when a company like Manpower, whose entire existence is to screen and hire candidates, makes a huge investment in a second life presence. A local developer / architect / entrepreneur, Justin helped Manpower put the site together.

Despite all of these references to second life popping up in the media and corporate world, I still have no plans to go out and create a second life account. I have started to take second life (and other virtual worlds) more seriously, because they seem to be becoming much more main stream and accepted. I am not sure if I will ever be enticed to go into the virtual world, for now I am content to work on my first life.