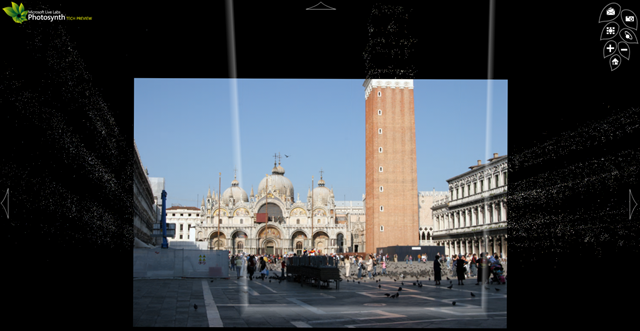 This Thursday (October 25, 2007) is the 2nd Annual Chicagoland Innovation Summit, presented by Innovate Now. Microsoft is a sponsor and will have a large presence at the event. I will be on hand with several of my colleagues and we will be demonstrating some very forward looking technology, that I feel is quite innovative. I thought it would be interesting to give a “sneak peek” of some of the technologies that we will be showcasing at the event.

This blog entry describes technology that is currently still in the labs environment. Microsoft’s intent with this type of technology is to build it into shipping products or services that are delivered to you. There are no timelines or product plans available at this time and there is always a chance that you may never see this technology in a shipping product.

The concept with Photosynth is that you take lots of photographs (that are digital or have been converted into digital) of roughly the same area from different angles and you run them through a process that identifies objects that the photographs have in common. The Photosynth is a representation (part 2d and part 3d) of the pictures that you have taken. You are able to “browse” through the environment in a way the seems like a virtual world, but you see it with the actual photos that you took.

The implications are limitless

If you have followed this blog, then you will know that I am a photo-hobbyist (still well on the amateur side), and I love taking photos and sharing them with the world. When I heard about photosynth I was obviously intrigued (truth be told I was at Wrigley Field a couple days after that and took like 300 photos in anticipation of someday being able to synth them). This could really make a fundamental change in how we recreate our vacations, as an example.

But there is more to this than just being able to recreate a place in time. I mentioned last year at the .NET User group when I was talking about the semantic web that we were getting pretty good at tagging things and describing them, but we really had not yet tackled the “time” aspect. I gave a very moving example of pictures taken at the same location in NYC in 1992, September 11th, 2001, September 14th, 2007 and September 11th, 2003. One of the potential uses of photsynth is to break that time barrier. Imagine a scene that has not changed much in 80 years (such as a historic theatre that has been preserved), you could intermix images from across the decades. Cool thought, eh?

Want to see it in action?

Currently you are not able to run the process to synthesize photos yourself, but you can see some stunning examples of photosynths that have been pre-rendered. The collections require a Windows Platform (XP SP2 or Vista) and IE or Firefox. Please note that this is pre-Beta technology, so there is a chance that it will not run on your machine. My favorite collection is the Piazza San Marco in Venice, Italy.