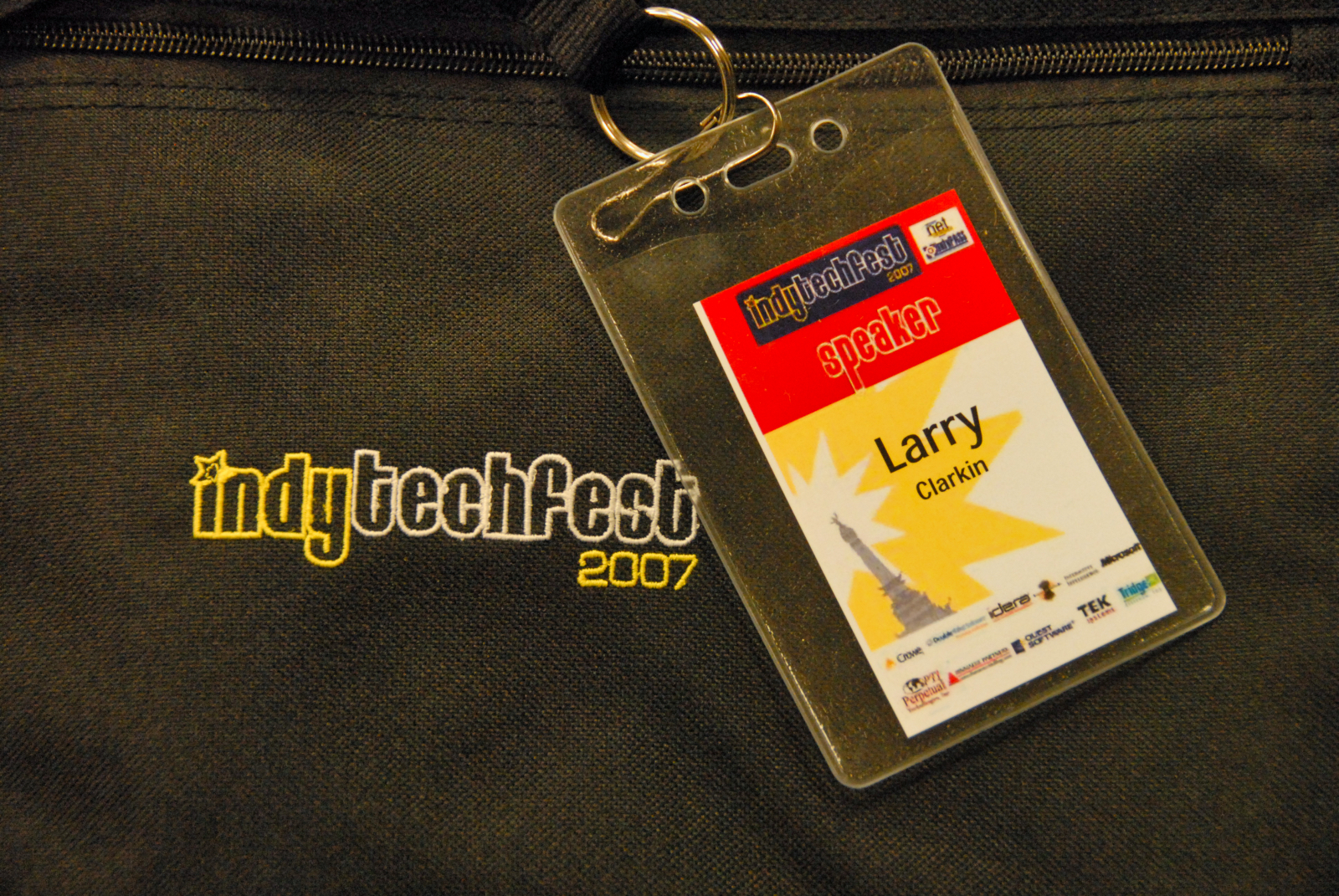 Yesterday (Saturday the 13th) was the IndyTechFest in Indianapolis, IN. IndyTechFest is an all day technology conference that is centered around Microsoft Technologies (mainly .NET and SQL Server). It is co-presented by the Indianapolis .NET Developers Association and the Indianapolis Professional Association for SQL Server. It is very similar to the “Day of .NET” or “Deeper in .NET” events that have been held in other cities. They had close to 400 attendees and the entire event was free to participants, thanks to some great sponsors.

What does it take to put on a conference like this?

I was amazed at what a professional conference the organizers were able to put on using a volunteer work force, especially because this is the first time that they have held the event. This event was on-par with smaller technical conferences that I have been to that cost in the neighborhood of $795 to attend. Some interesting things to note:

The day started off with a bang during the keynote. They had the usual 10-15 minutes worth of logistical information (thanking the sponsors, describing the session format, talking about the user groups who put on the event). Then Brad Jones came up to give an overview of the technology landscape in Indiana. Hey talked about the number and type of jobs that were available in the area (a large number of open positions for people who know the Java platform). Brad works in the online publishing business, so he also explained how the online publishers “judge” the popularity of technologies based on the number of articles read and keywords searched for. There was some surprising data in there and I hope to spend some time with Brad to publish some of the findings that he talked about (quick preview: Java is still number one, C/C++ is number 2, Visual Basic is growing like gang busters). When Brad tried to give give his views on technology trends, he was rudely interrupted…

Buck Foley, a motivational speaker who is “thrice divorced and lives in a van down by the river” busted in on the presentation. Buck is a distant cousin to Matt Foley, who you may remember from the Saturday Night Live fame. Buck spent about 15-20 minutes describing his views on technology and giving us a preview of the conference. This included:

Dave Bost got the whole thing on video tape, but it is almost unusable because they camera was shaking so much as he was laughing too hard while he was recording. We are in talks with Buck Foley’s agent to get him to appear at an MSDN Event or a Devcares.

Note: Not only is imitation the sincerest form of flattery, but Buck Foley also donates a portion of his proceeds to the Chris Farley Foundation.

Code to Live roles into town

Code To Live is a program that my colleagues Josh Holmes and Steve Loethen are putting on this year. I will have a separate blog post describing the program and everything that it entails (and ask for your participation in the program). Josh and Steve are currently on a kick off tour where they are touring around to various events on a Harley-Davidson Road King. Josh spent Friday and Saturday morning at the Devlink Event in Nashville, TN, but drove up for the afternoon and gave an impromptu “closing remark” to the IndyTechfest crowd. The crowd really liked the fact that we wheeled the motorcycle into the conference area (not sure if that was cleared with building management ahead of time or not). 🙂

But wait there is more…

I did 2 sessions at IndyTechFest. One on software and services and one on Mashups. I will give a quick recap of those sessions and post the slides that I used in a blog entry in the next couple of days. I also recorded a couple of podcasts with some of the speakers at the event including Chad Campbell, Tim Landgrave, Robert Bogue and Brad Jones. Each podcast was interesting in its own ways, but the one with Brad Jones was especially interesting because I asked him what it takes to put on an event like IndyTechFest.