Last week I saw a presentation by Chris Bernard, the User Experience Evangelist for Microsoft’’s Central Region. During his presentation, which was a general presentation about UX (User Experience), he brought up a really interesting concept called a reverse salient. A Salient is the term that the military uses for the troops that are leading the attack into enemy territory. These are very important as they are “leading the charge” and you need to pay careful attention to them (if for no other reason than they take a lot of the casualties).

The reverse salient by contrast is the troops that are trailing in the attack (not to be confused with medical or supply units that are supposed to be behind the fighting troops). Military study has shown that the many battles are lost because of the reverse salient. The trailing troops create an opportunity for the enemy to “break your line” or outflank your units. This article describes the reverse salient in a little more detail and sums them up as being your “weakest link” 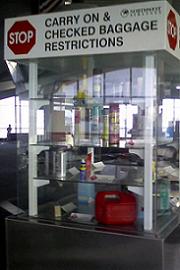 I took the picture on the right at the Milwaukee Airport. It is an example of a reverse salient in the Transportation Safety Agency (TSA)’s fight to make airline security safe and convenient. It is a large kiosk that shows you the items that you cannot bring on in carry on and checked baggage. It is hard to tell from the photo, but it shows a gas can, a can of RAID, lighter fluid and a bunch of other dangerous products that clearly you should not bring on to the airplane. While the salient for TSA is the security checkpoints and thorough inspections with all sorts of technology, why do I consider this the reverse salient? Surely educating the passengers about the products that they are not supposed to bring is an important part of the TSA strategy! The problem is that this display is positioned after the security check point.